Chapter 7 – Portal to the Quann The layout of the Black Manor.  I used Dwarven Forge walls and floors, accented by the wonderful Dundjinni drawings of Eric of Ptolus Another view of the set-up.

The gate of the Black Manor.

The Behir unleashes its lightning on the party.  The ogres may be seen hiding in the wings. The Behir has grappled Marcus.  Moments later, it rolled a “1” when trying to swallow him whole.

Zsavri attacks!  That’s Zsavri on the far left.  Behind the pillar at center, her fiendish giant praying mantis companion attacks Laelia.  At far right, her yuan-ti retainers fire arrows at Nereida.  Near the center, Bonzimir has tumbled past the two remaining ogres to render aid to Marcus. Note that much of the layout of the Manor remains hidden from the players by pieces of cardstock.

With the behir, ogres and fiendish mantis defeated, Demetrios unloads on Zsavri with a lightning bolt The ancient beholder Charch-Pahn hovers over the Company and their couatl ally. The Wights attack!  The fight was spread over three rooms.  Marcus is facing off against four wights in the room at top, while Bonzimir, Nereida and Elida face off against four more in the room below.  This layout shows how I’m using the great Dundjinni maps by Eric of Ptolus.  Each room is a separate piece, laid out on the table when the PC’s arrive.

The last stand of the Betrayed.  The Betrayed (far left) mocks the Great Church’s paladins and the Company of the Starborn, who have taken over his temple, but cannot enter his Sanctum.  Kalerecent (center left) and Marcus (center right) have fallen prey to the traps in the corridor, while Bonzimir (top) cowers after having fallen prey to the Betrayed’s Turn Living power.

The Conflagration.Having inadvertently allowed a demon to pass into the Banewarrens, the Company of the Starborn has wisely fallen back to a less dangerous battlefield.  Here, a blue slaad rages against Marcus (left) and Aulus (right).  The two-headed demon has tripped both Nereida and Elida, and is turning to deal with Bonzimir and Laelia.  To far left, the red slaad is closing in.  Demetrios stands to the rear at right. The Jail Warden.A skeletal warrior and his undead prisoners attack the Company. 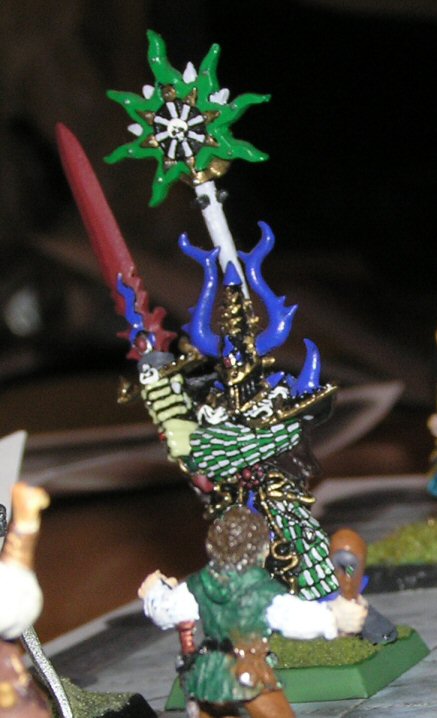 Warden Closeup.Another view of the Skeletal warrior, with Bonzimir in the foreground. Vallacor.  The lich Vallacor guards the ancient jail beyond death.  He is flanked by his skeletal minions and many minor undead slaves. Second Storm Giant.In the first run-through of the battle with the Pactlord assassins, Li and Saarachk, Li polymorphed into a Storm Giant.  That’s Saarachk in the background, still disguised as a paladin.  The downed base of Nereida’s miniature may be seen below Li.

Once More Unto the Breach.After we figured out the inter-edition changes to the polymorph spell, we re-ran the battle.  This time Li polymorphed into a “Delver”.  Lacking a Delver miniature, I used the bullette, shown here.  Saarachk has returned to aranea form (represented by the grell miniature, upper right).

Attack of the Silver King.  Okay, so Saggrinitys isn’t really a Fiendish Tyrannosaurus.  I was fresh out of silver dragons, so I used his second cousin once removed as a stand-in.  The scale was right…  Here we see Aulus (left) and Basil (right), flanking the dragon as it enters the Vaulted Hallway.

Tell Him I said “Ow.”  From this angle, we can see Demetrios in the background, kissing pavement after one round with a very angry dragon.