THE OUTER VAULTS
Although part of Chapter 5, “The Outer Vaults”, the Company of the Starborn actually encountered Grail Quest Team 2 in the Broken Seal Area (in room 12). Here, the Company of the Starborn walks into an ambush after tossing a torch into the room.  Erzak the gnoll ranger, his dire ape companion flank Bonzimir and Basil to the left, while Nisselantar the Ettercap and his giant spider companion flank them to the right.  In the foreground is the fallen iron golem.

At the top, Felix unleashes a psionic Mind Thrust which drops Ostarach the Ogre Mage, while below, the Pactlords move in for the kill on Bonzimir and Basil, both stunned the Mind Blast of Yuinthu the Mind-Flayer (in red). The giant spider is dead, but has been replaced by Wiver the Heiracosphinx.

Demetrios (in green with bow at top), unleashes a fireball on the Pactlords while Felix continues to face off against Ostarach. As Erzak and his ape flee down the corridor at right, Demetrios unleashes a second fireball. Basil (and Elida behind him) is still stunned by Yuinthu’s Mind Blast, and is fairly helpless as the Mind-Flayer begins to wrap its tentacles around his head.  Moments later, Wiver the heiracosphinx would beat Yuinthu to the punch and kill the mighty warrior.  In the background, Ostarach is on the ropes, while Felix temporarily flees.

With his companions dead or missing, and Ostarach the Ogre Mage rapidly regenerating out on the balcony, Bonzimir faces off against Yuinthu and Wiver.  Moments later, Yuinthu’s Mind Blast ended the fight.

At our next session, the newly raised-from-the-dead Company of the Starborn catches the Grail Quest Team with its pants down.

Here, the Company of the Starborn find the GQT2 fighting the Crazed Guardian in Room 8.  Of the original GQT2, only Wiver the sphinx (here played by a blue dragon miniature), Ostarach the Ogre Mage and Yuinthu the Mind-Flayer have survived.  For the Crazed Guardian, I used a dire ape miniature.  In this shot, they are about to be rushed by the Company of the Starborn.  The fire giant miniature is actually Basil, under the effects of an enlarge spell. 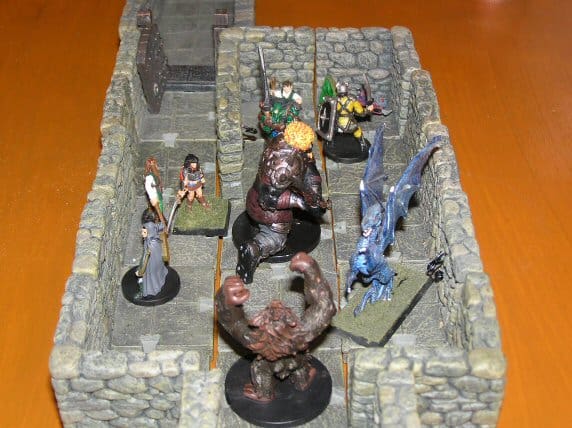 Things went poorly for the GQT2 right from the start.  Here, we see Yuinthu down for the count (at upper right) and Ostarach flanked by Bonzimir, Tutor, Elida and Basil. Demetrios (behind the column) is attacked by a specter in a Banewarrens storeroom.  Basil (now with Romanesque miniature) and Bonzimir move to his aid.

Kikanuile the Green Hag attacks.  Basil and Marcus (a new member of the Company of the Starborn) are up front.  The hag has enmeshed most of the party in a web spell, and then burned through them (as well as Basil, Nereida and Elida) with a lightning bolt. (4/24/05) The Company of the Starborn faces off against the blessed girallon guardians. (5/22/05)