The land of Hrethek was once the south of Corland, proud home of chivalrous knights and prosperous farmers. Now it has fallen under the iron-fisted rule of the formians, an otherworldly race of centaur-like ant-men. From the beginning, the formians have single-mindedly sought to dominate anything within reach, and to bring it into the hive-mind.

A land of gently rolling hills between the Stoneheart mountains, the Saronne river and the straits of Mavarre, Hrethek is sits at crossroads of some of the most important sea routes in Vatheria. Once, the southern ports were filled with ships from a dozen nations and half as many races on any given day. But the formians are not sailors and so the ports sit silent, the ships gone or rotted and lying on the harbor bottoms.

Little is known about what truly happens within Hrethek. It is thought by the wise that the Hrethek began with only one queen, jealously guarded within the fortress-city of Kal Primus. Divinations have revealed that this entity refers to herself as Ryakal, the First Mother. But now it is generally thought that there may be as many as three or four queen formians in Hrethek, each subject to their mother at the capital. It is further thought that whatever portion of Hretheks original population survives does so in underground slave cities where they are worked without mercy until they die, bitter and broken.

It is not the need for new slaves which drives on the aggressive warriors of the formian realms, however. It is the formians basic drive to dominate all around them, to bring all into one harmonious, cooperative whole. And they are very, very good at enforcing their will on those around them. They conquered in a single generation the land that required two centuries of Conorrian occupation to pacify.

Despite their stunning successes, not all has gone well for the formians. Their assault on the Stoneheart mountains met with stiff resistance from the giants and their subject tribes of orcs and goblins. The collapse of Corland was halted at the river Saronne, and now a great defensive line is being erected on that border. From time to time, magic-wielding adventurers have staged daring raids into Hrethek cities to rescue human slaves from their formian masters.

Hretheks territory has stabilized in recent years as the natural borders of river, ocean and mountain have slowed its rapid expansion. However, there are some who argue that this is merely a pause in the campaign for the purpose of breeding new armies, and that very soon, the formians will again swarm forth, intent upon conquering the world.

For most of written history, Hrethek was part of Corland. The cities of Arvaiglos and Darcassore were centers of industry and great art. The southern shores teemed with bustling activity. For more information on this history prior to 2753, see the entry for Corland.

The first known contact between the formians and the residents of Corland was in the year 2753, but most historians believe that they must have arrived in region years earlier, for when they burst onto the scene, it was with great armies and a thorough knowledge of the terrain and their targets. In that fateful year, they overwhelmed the unprepared towns of Chantalle, Dorevec and Medregar. The following year, they destroyed the army of Corland at Medregar and took captive its king, Jorrev.

The formians laid siege to the cities of Darcassore in 2755 and Arvaiglos in 2757. Both were hard-won victories achieved despite the fierce resistance of the defenders. Arvaiglos was home to the knightly orders of the Mantled King and the Brotherhood of the Blinding Light. The knights of those orders fought to the last to defend their holy relics, hoping to buy time for reinforcements who were not coming. Both cities are now strange formian hives, and the subject of many sad ballads in what remains of Corland.

The fall of Arvaiglos signaled the end of the initial formian campaign. The enslaved population of humans and halflings swelled the ranks of workers, who soon began to build the great formian hive-cities which are now home to the First mothers daughter-queens. During this time, the formians fought a disastrous war with the giants of the Stoneheart mountains. Secure in their mountain fastnesses, the giants and their orc and goblin slaves slew thousands of the Hrethek before the latter retreated back into the plains of Hrethek. In 2762, an armed expedition into the Neldorean wood met with some limited success before the natives drove them back across the narrow strand at the southern edge of the mountains.

In 2768, Queen Armallia, last monarch of Corland, rode forth to reconquer her lost lands. At the head of an army 30,000 strong, and supported by 3,000 Aelissian archers and 6,000 Lorraine troops, Amallias army met with some initial success. Her river crossing on a magical bridge caught the Hrethek completely by surprise. The swift speed of her advance bypassed several Hrethek cities, striking at the heart of the formian empire, a fantastic hive construct built over the ruins of Darcassore.

Here Armallia met her match. A vast horde of formian workers and soldiers marched forth from the city, led by the giant vassals of the hidden First Mother. The formians showed an understanding of magic which they had never before displayed. Before the Corish understood what had happened, they were surrounded, and formians were pouring out of hidden tunnels and camouflaged redoubts around the plain. The last stand of the Queens bodyguard and the death of the queen herself has since become the subject of many a ballad and poetic lament.

Over the last ten years, the Hrethek have been seen only rarely. Here and there on the borders, travelers will see a small group of workers or soldiers. And rumors of a war against the giants continue to circulate. But the formians seem to waiting for something before launching their next campaign. 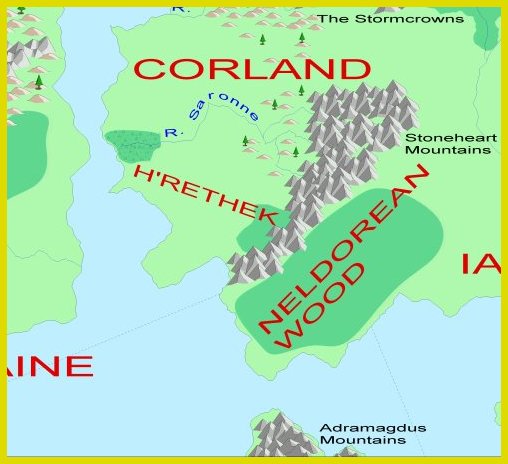 Kal Primus (population unknown) Before the invasion, Darcassore was a small city in the middle of southern Corland, best known for its mighty Conorrian walls and its soaring cathedral towers. Now, in its place stands the great hive of Kal Primus, a weird construct more than half a mile across constructed of alien materials. The great hive looks ominously alive to Vatherian eyes, with its ribbed buttresses and fluted, twisted columns. No one is able to approach Kal Primus safely, for it is patrolled above, below and on the ground by a vast horde of workers and soldiers. The only reliable reports of the city are from those who escaped the massacre there in 2768.

Arvaiglos (population unknown) No one knows the formian name for the hive that has arisen above this ancient city in the Stoneheart foothills. No one has even claimed to have sighted the city since its fall. Likewise, oracles and divinations can reveal little about it. It seems that some strange magic is afoot in Arvaiglos.

The Maggardh Fens – This large wetlands along the lower Saronne are home to an astonishing varietyof life. And deep within them lies an ancient secret. A great stone arm holding a colossal orb protrudes above the gnarled cypress and valaresh trees. It is known to locals as the Hand of God. The arm would be proportional to a statue standing more than three hundred feet tall. Local lore says that it drops just a tiny bit lower into the fens each year. It is believed that this massive statue is the only remaining example of the cyclopses of Numanthaur, that once guarded the borders of that ancient realm.

The Shadowwood – This forest in the foothills of the Stoneheart mountains was sacred to the Miletians, who sacrificed to the god of the forest each year, believing that he brought good rains to the valleys of southern Corland. For the last hundred years, the Shadowwood has been the haunt of the dragon Urugall. The dragons relationship with the formians is unknown at this time.

The Ring of Gretagne – The small town of Gretagne now stands empty, its inhabitants dead or enslaved within the pits of Kal Primus. But the town was most famous for its ancient ring of stones. These gleaming black monoliths stand atop a ten-foot dike of earth more than twenty feet across. Each is more than thirty feet tall, and made of an unknown metal with a mirror-like sheen. Each monolith is separated from its neighbor by more than one hundred feet, and the diameter of the ring is more than a mile across, with the town at its center. Druids hold the ring to be sacred, but its meaning and purpose are closely held secrets.